Why Stealing is Bad 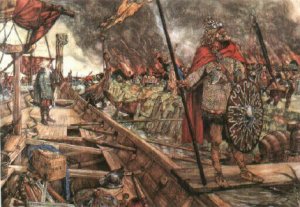 Why is stealing a mortal sin? I wasn’t really sure, besides a vague moral feeling, until I was mugged, last week.

Now I realize: stealing reduces the value of goods for a society.

From an evolutionary point of view it is as easy as that. After the Vikings visited a French village there was not much left except what little the Vikings couldn’t carry away. The rest was broken, spilled, burned, dead or traumatized. BUT, for humanity, the village, as a value producing entity, was worth far more than the sad plunder the Vikings dragged away.

However the French had little choice, until somebody came up with the idea of rather giving away the whole village and renaming it Normandy. Thus the Vikings didn’t destroy it all but sat back and enjoyed the fruits of their former victim’s labor. Not all ideal for the French, but it sure beats getting raped and plundered annually.

On my smaller scale some Sri Lankans climbed over the roof and into my unprotected office. They emptied a tray of gems and ran. Nobody got hurt, no window was broken, and yet the loss for Sri Lanka as a whole was much greater than the value of the stolen goods.

Without certificates, without grading reports and international sales channel those gems are now worth only a fraction of what they were with us. Sri Lanka as an exporting country has suffered a loss. Police, the avenging angels of mortal sin, should have protected their society from that loss. Forget that.

I think our bible-writing forefathers knew that for society as a whole stealing is a bad deal.

There hidden may also be the reason why international white-color crime is less dangerous than stealing somebody’s workshop tools in a small village. While the latter directly damages a small society seeking revenge, the former causes far more damage but ‘only’ to a remote and powerless entity, taxpayers or banks seeking only refunds, while the village hacks off the thieve’s hands, we read the newspaper with a shrugging sigh, hoping that a lengthy law suits ends at worst with five years of sabbatical in a comfortable one bed room, with all limbs attached.

The West’s Romance with Poverty 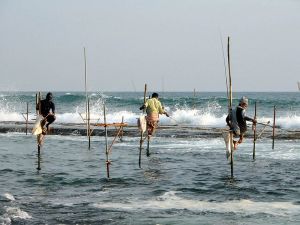 Yesterday I watched a report about Sri Lanka on discovery channel: The usual images of beaches, temples and smiling people.

The report closed with a longing sunset scene of those uniquely Sri Lanka fishermen sitting on sticks in the water.  The commentator’s fade-out comment: “Here in Sri Lanka, where work is still a pleasure.”  Beg your pardon? I have tried to sit on those sticks and managed to stay up there no more than ten minutes. The sun burns brutally from the sky and the water. Thus grilled from both sides, one sits there, the shaky stick-structure digging into the flesh while the sea salt eats at your skin. It is terrible.
Even with lots of training it will never be a pleasure. Sure, one gets used to everything but why then abolish torture?
Those men sit there every day of their lives, from the age of eight or ten when they are old enough for their own “stick” to the day they are too old to climb upon the stick and die. No retirement fund there.   On the other hand I have seen the TV teams in the luxurious resorts along the coast. If they do not enjoy their work, then who will?
It seems somewhat ungrateful to envy the fishermen. Poverty is not romantic, nor honest.
It has bad teeth and dies early.” 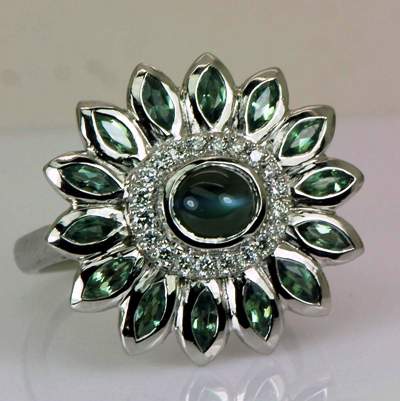 We have been running WildFishGems.com since 2003 and I always enjoyed sharing the adventures’ world of an wildly unregulated gem-mining and -trade. Writing being my, only 2nd to Wife, biggest love since age five, the out-put grew daily, and our commercial site soon proved far too small for all those topics.

Hence, with the aid of Audra, my online editor & angel in the US, we started this free for all page.

How to judge sapphires or rubies and other practical issues around the gem business will continue to be published on WildFishGems.com.

Here, I will share the stuff a gem trader gets to see in the remotest parts of the world, on the edge of globalization, I will foul my own trade and bash east and west for ignorance and laziness wherever I can. That said, no gloom, we live in the most wonderful of all possible worlds.