The Boy and the Sapphire

A story from the rough edges of globalization

‘Trouble in Madagascar’ – The Audiobook 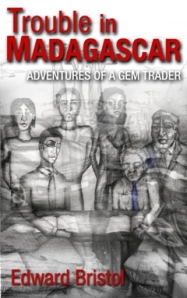 “On his day off, gem trader Edward Bristol enjoys the sunrise on an African beach. Until a mobile rings in the sand. Somebody must have lost their phone in the night. Edward answers, not suspecting that the caller will ruin his day. Soon after, he is kidnapped, escapes into the savanna, but again is hunted down and finally swept up in revolution, corruption and international deal making.”

The full novel is now available for Kindle and Apple.

Thanks for all your feed-back. I hope to start a new Ed Bristol story sometimes this year.

Once in a while I swap my tray of gems for a day of dirt. This is usually triggered by a bad gemstone in a new parcel, a software problem or a customer who treats me like a crook. Before I loose my temper and call a customer a psychopath or a miner a cheat, I get out my Kärcher.

For those not familiar with German engineering, a Kärcher is the high pressure cleaner. Nothing beats a true Kärcher. In German, “kärcher” is a verb and its means to clean-out hell. They are expensive but genius.

Kärcher come as electric household items and go up to industrial gasoline monsters. While the latter are used to drill tunnels through the Alps they are all based on pumping fluid out of a pistol with such force that water turns to steel. Even my midsize household variety will rip toes off your feet, demolish letter-boxes or shred hedges in seconds.

Cleanliness fanatics, compulsive obsessive hygienists, and men over 40, worship them as the ultimate therapy against the filth of life.

Evil tongues say men love them so much because of the persistent on-command pressure (you know, prostate problems, and erectile dysfunction and so on). Silvio Berlusconi, the Italian Ex-Prime-Minister is said to have a world class selection of Kärchers.

Personally, I can’t claim freedom from primate instincts but I do know I hate dirty houses.

Our business allows buying gemstones but it does not finance real estate. However, a gypsy by heart, I move a lot. We always rent; and rented houses are dirty, especially in some of the places we have lived.

To understand a Kärcher, you need to see what it does to an old house. Is your backyard laid with red bricks? They will shine in bright orange. Your walls are white? The Kärcher will peel off blackish soup and leave stripes of shining white behind. Gray marble? Mossy brown granite? Discover that there are not only color-changing gemstones but also color-changing houses!

A day of kärchering is dirty beyond imagination. Places that are usually left alone, behind the garbage bins or under the stairs, will explode in fountains of mud. Ancient layers of decaying matter will fly sky high. The dogs hide; and so does my wife. Only the flies, they love me. To succeed here one must surrender to absolute dirt. Then, it is a spiritual experience. Zen and the Kärcher.

Praise global distribution networks. I bought my Kärcher in an Asian department store. It is a very German product but I got very local reactions:

In Colombo the neighbors confirmed I was crazy. In Bangkok they wanted to borrow my Kärcher for the annual water festival (accessory to murder that is). The Balinese worried to stir the “Buta”, the house demon. In Sydney I was yelled at for wasting water and in Lisbon the neighbors rolled their eyes as in “those Germans”. One thing you can be sure of, however, is envious looks from elderly men. It never fails.

Be warned though, kärchering is addictive. Once started, nothing but sleep will stop the alcoholic from drinking. Once dirty, nothing but exhaustion will stop me from kärchering the whole filthy city. There always is another corner to be flushed out.

Death-by-Kärcher is common amongst German retirees. Once they are finished inside, they turn to the street. That is their end.

The Boy and the Sapphire 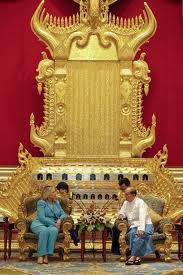 Beyond the headlines of war, a good thing is happening. Some may have noticed that lonely Myanmar, aka Burma, has turned and reached out to the West. It has installed ATMs, freed opposition leaders, voted a parliament and now is even talking to Hillary Clinton. To those who’ve seen the country only five years ago this is nothing less than a miracle.

Five years ago Burma was oppressed into a 18th century time warp from which even Sri Lanka, Pakistan or Cambodia seemed like beacons of freedom and prosperity. I was arrested for simply looking (with binoculars) over the lake to the house where Aung San, the daughter of Burma’s founder, was locked up for 15 years. Aung San now runs for parliament and meets Hillary!

Those days, $50 would get you three kilo of Kyat notes with which you could buy, well, nothing really because nobody wanted it. There were no telephones, no internet, no newspaper, no ice-cream, no healthcare, and no credit-cards – it was perfectly medieval.

Thanks Hillary, for going there. I am sure the trip wasn’t easy, but you will have recognized the beauty and authentic goodness of its people. Probably you haven’t seen their terrific gemstones but we here all love them and, please, please, let us again buy and sell them legally. If you do, we promise to be very good, pay taxes and all.

The Burmese have been traders and business people since the dawn of commerce. They are very good at it; honest but tough and hard working; and they will be again. If only we let them in now. It must have cost the Burmese military a lot of courage to overcome their pride and reach out to the West. I wish our politicians had, at times, the guts to say: “Heck, I was dead wrong, sorry folks. Let’s do better.”

It is on us now to acknowledge their courage and show that we too can change and do better.

Let all parents know: In the 21st century, you will be watched.

The clip ruined my week but never mind as long as William Adams’ week is worse. The memory of being whipped for nothing more than leaving the light on (so small, I was scared in the dark) or for an only average test result at school.

The fact that this is done by your own parents (shame the moms, too) and in your own bedroom makes it so inescapably terrible. The immediate pain on the skin is little compared to the effect of William’s final words: “See what you’ve done to your family! Are you now happy?” Obviously she wasn’t, cramping on the floor, but she might have believed that it was her fault, that she was blame and not him. That is how kids are.

I will not whine about how tough my childhood was. For most kids in Asia and Africa beatings are the easy part. But let me say that, after seeing Hillary’s video, I wanted to get on the next flight and give my dad a little whipping, just for fun or because he didn’t come to my daughter’s birthday. Don’t get me started. May he thank God that I am not all like him – an-eye-for-an-eye and so on.

Beware of neglect and the damage done to children. It comes back in terrible shapes; as terrorism, and racism, and crystal-meth and, of course, more child abuse. Personally, I intend to break this cycle in my own little family. My daughter will not have to endure what was done to me.

Sure, a teenage daughter can be a pest and all. My daughter will, perhaps, be a pest some-day, but I herewith –forever public– ask God to rot off my hands if I ever do anything remotely comparable.

I just love CCTVs, wireless webcams, IP-Cameras and constant home surveillance. Forget about privacy if we can protect our children from harm.