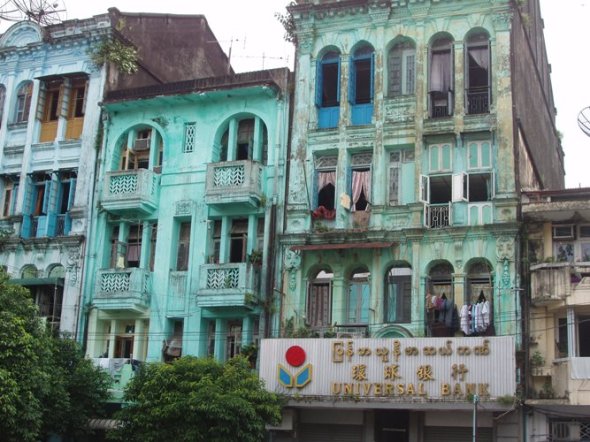 Out of the plane I can hear “Geee-cko-Geee-cko” coming from the main building. This is Rangoon International Airport. It is quite and darkish.

French raiders in the hotel bar discuss the ‘great opportunities’ of Burmese antiques under the ‘current circumstances’.

My local contact secretly squirrels away gems for an escape abroad. He looks at the stacks of local bills and says: ‘This no good’.

Our lapidary keeps the doors open. No security is needed. Burma is safe, as long as you don’t mess with the generals.

A sign at the muddy river: ‘No foreigners beyond this point’. There is no brigde.

My taxi has wooden seats and a plastic bucket taped to the floor. It is half full with red slime. Many Burmese still chew betel-nuts, but they are not allowed to spit on the streets anymore.

Grand colonial buildings are occupied by the military. Specky shirts hang to dry from broken windows. Nobody is allowed on the sidewalk. They are serious: I get yelled at.

A local garage makes ‘new’ cars; by hand; one by one; out of scrap metal and an engine. They produce three per month at $1.5k

Drunken monks fight over cigarettes. Religion can be anything.

Nobody dances at a pop festival. VIP kids sit behind security and fences.

No ATMs, no mobile phones and no computers proof that economic sanctions do work for the lower 35.000.000.

A grainy TV show features stone-faced farmers dancing in shabby costumes. A subtitle reads: ‘Here they still live happily without foreigners’. So very thin they are.

For good and bad, Burma is past caged in a country and its people.

5 Comments on “Impressions from Burma”